Whether you have short or long hair, getting the right volume is always difficult to achieve. And when you have fine hair, styling almost seems impossible.

Our Rating:
Best for:
Short and thin hair
Check Price

Voloom currently has three different models of their volumizing hair iron, each with its uniqueness, strengths, and weaknesses. 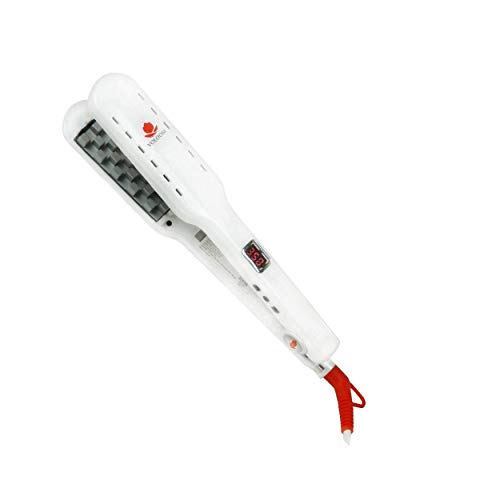 The Voloom Classic is the main model of Voloom’s volumizing hair iron range. It is known as the heavy lifter iron boasting a 1.5 inches wide plate. It has the largest volumizing platform of Voloom’s checkerboard plates.

The Voloom Classic is the best tool to give you the sexiest hairstyle with the most volume.

And you know what’s even better?

Are you craving big curls? The classic hair iron is the best partner to achieve that look.

The volume will last you not only a couple of hours but up to 2 to 3 days.

This Voloom iron can make even the limpest hairs healthy and bouncy in less time. It suits all types of hair but works best on long, below the shoulder and thick hair.

How To Use The Voloom Classic Volumizing Hair Iron: 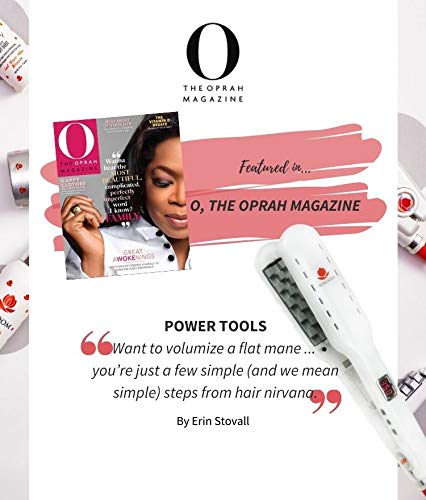 The Voloom Classic Hair Iron is the best hair volumizing tool you can get for starters. Despite its wider plates, it can get extremely close to the roots. The Voloom Classic also works great for all hair types and lengths. 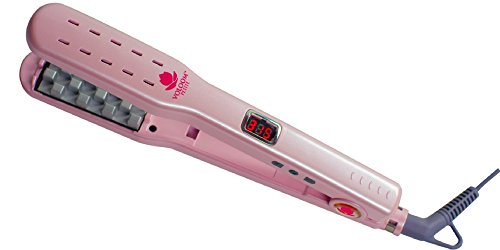 The Voloom Petite is the middle range iron from the collection. With a one inch wide plate, it’s the perfect size for people with medium length hair that’s just below the chin or by the shoulder.

This little sister of the Voloom Classic delivers a soft volumizing effect that will last.

The Voloom Petite carries all the same features as its big sister, the Voloom Classic. However, there’s a slight difference regarding size both in the whole iron and in the patented checkerboard plates. With this, you can achieve just the right amount of fullness which is perfect for girls with short to medium length hairs.

This little sister of the Voloom Classic delivers a soft volumizing effect that will last.

The Voloom Petite carries all the same features as its big sister, the Voloom Classic. However, there’s a slight difference regarding size both in the whole iron and in the patented checkerboard plates. With this, you can achieve just the right amount of fullness which is perfect for girls with short to medium length hairs.

How to Use The Petite Volumizing Hair Iron: 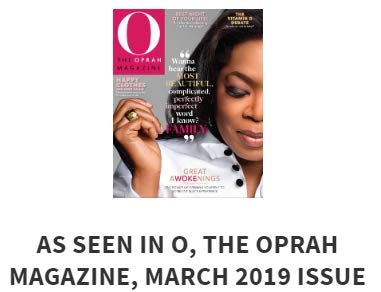 If you are looking for a hair tool that can boost your every day your locks or you want something you can bring with you wherever you go, the Voloom Petite is the iron for you. This aptly named hair tool is a great investment to enhance your mid-length hairstyle. Plus, the pink hue adds for a girly touch. 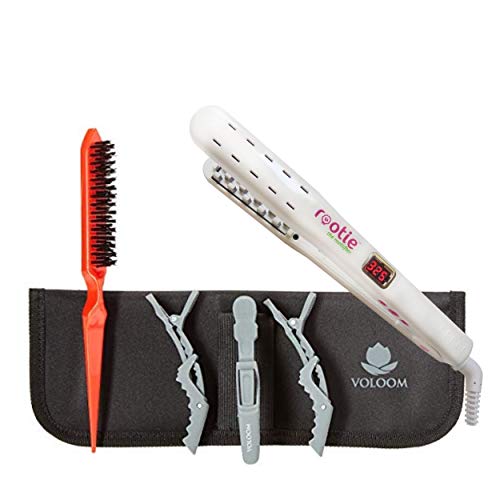 The Voloom Rootie The Rootlifter is the smallest sister out of the three. Don’t just look down on this baby iron because it can still give you the perfect amount of volume even with its ¾ – inch plates.

The Rootie is the perfect partner to style even the shortest and thinnest of hairs. It has the right size to make fine hairs fuller and has more life in an instant. 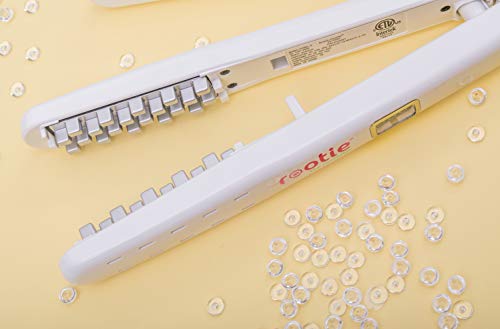 The Voloom Rootie is the solution to making the shortest of hairs have more volume and life. The Rootlifter can give fine and thin hair an instant lift without much effort at all. If you have a pixie cut or a short bob, the Voloom Rootie can easily solve your styling woes.

Styling your hair, especially if it’s straight and slippery, is one of the most challenging tasks you could take on as a woman. Sometimes, no matter how many tools and hair products you own, you keep coming back to your usual updo or ponytail.

It’s frustrating. We get it. And we’ve all been there.

There are many reasons why certain hairs can’t seem to hold up a style, whether you use a heated tool or not. It may be that you have been using a wrong shampoo all your life, or you use way too much conditioner making your hair heavy and too oily. These common errors often result in an unworkable mane.

But what if there is now a universal tool that can help volumize all types of hair at any length. And you won’t even need to fuss around with various hair sprays and pomades. You can also take your shampoo and conditioner out of the picture because when you use this iron, it won’t matter at all.

Time To Add Voloom To Your Hair

Voloom is a revolutionary brand offering a new kind of hair tool.

To make things clear, it isn’t a curling iron nor is it a flat iron either.

Voloom is the first iron to focus on hair volume, hence the apt name. It is designed to volumize even the straightest and thinnest hair in just a couple of minutes. Imagine your locks full and bouncy, that’s what Voloom Irons can do for you. 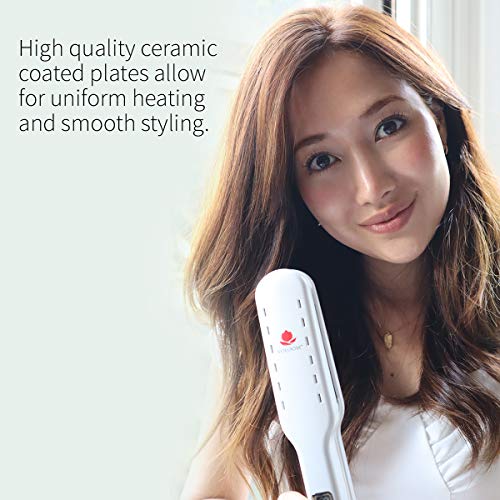 You may see what the Voloom Iron looks like and think about what makes it unique. Somehow, it appears as a typical flat iron with a weird plate. For a second, you might even consider calling it a crimper.

But it’s not. Not even close.

With Voloom, you can get instant volume without any other products and not much effort. Don’t even worry about having thin and stick straight hair because a Voloom iron can make it look fuller and bouncier in no time.

How is it even possible?

Well, the secret behind Voloom’s hair transforming results is thanks to its ceramic plates and ionic technology.

Let’s dive into more information on these two technologies and why they work best in comparison to other materials and technology.

You might be familiar with straightening and curling irons made from ceramic material, but did you know that there’s quite a big difference between a real ceramic iron and a ceramic-coated iron?

If not, then, here’s the reality.

Ceramic-coated irons, whether if it is a straightening one or a curling one, usually have a metal material underneath. Most of the time, ceramic-coated hair irons is a lot cheaper given that the ceramic is only used to give a smooth and non-shiny appearance. 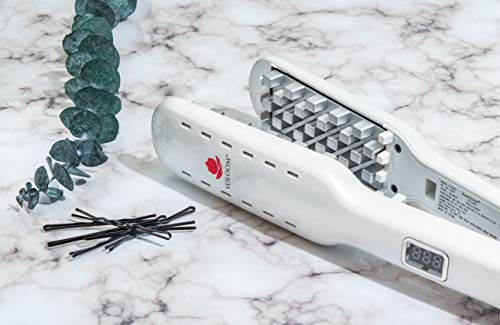 Why is it important?

Well, although there is a ceramic component technically, you are not paying for the high-quality result that you would end up getting if you had the pure ceramic plate or barrel. The heat distribution would be different, and the heat will not stay as hot in comparison to a real ceramic one.

Another advantage of using ceramic hair styling tools is the smoothness of its surface. Whether it’s a flat plate or a barrel wand, you can smoothly glide your hair through an exact ceramic material.

You get perfectly styled hair with a shiny finish that can last until a couple of days.

The use of ionic technology is now a standard in a lot of hair tools, especially hair dryers and blowers. The science behind it is due to the negative ions. Different hair tools benefit from the negative ions ability to break up water molecules quickly, making drying and styling faster and easier. It also reduces the appearance of frizz by sealing in moisture in the hair, leaving it looking soft and silky.

Aside from these two features, Voloom irons are known for their patented checkerboard plate design. This unique feature is what gives even the thinnest of hairs the most fantastic volume. The checkerboard indents create a volumizing structure that naturally lifts the hair up and away from the scalp.

The alternating platforms of the plate are beveled and raised to build lasting volume without any hair sprays, gels, or mousses.

You can also count on Voloom’s safety features which include an advanced locking mechanism that protects your hair as well as the tool whenever you are on the go. It ensures that the plates lock together perfectly which makes packing for travel a whole lot easier. Each Voloom hair iron also comes with a 360-degree cord that swivels for the optimum flexibility and ease when styling.

When it comes to settings, Voloom allows you to customize and adjust the iron’s temperature from 220-degrees Fahrenheit to 395-degrees Fahrenheit, allowing you to experiment on different hairstyles. You can easily check and adjust the heat thanks to the digital LED display. Doing so will also let you determine which temperature works best for your specific hair type. There’s also an auto shut-off feature that turns off the hair iron if it detects no use within 30 minutes. This product highlight is a major advantage for users, especially those who are always on the go.

Although Voloom carries other hair styling products, their hair irons range between three different models. To help you make the right decision, here are a few guidelines in choosing which Voloom is best for you.

Before you can even begin to consider which Voloom model you want to buy, you must first be familiar with your hair. After all, your hair is the most affected once you purchase your iron. Get to know what exact type of hair you have by going into your favorite salon or asking an expert’s opinion.

Decide Which Style You Want

Although each Voloom will deliver you volume, it will have different effects depending on the hairstyle you prefer. Do you want to keep your hair straight while having the volume up top or do you prefer having soft waves with a volumized crown? The choice is up to you.

Consider Where And How You Want To Use It

There are three different types of Voloom available today. Although each serves the purpose of volumizing your hair, they come in different sizes that can somehow make a difference in the result. Think about what you want to achieve by learning how each Voloom works. You can learn more about that in the individual product reviews below.

Aside from that, consider where you plan on using it. Will you take it traveling or use it mainly at home? Thinking about the possibilities of when and where you will use it can help you land on a better decision.

The Voloom Petite and The Voloom Rootie are almost similar in size with a slight difference in the plate width. The Petite has a 1-inch plate while the Rootie is only at ¾ inches. If you have medium hair length, opt for the Petite instead.

Comparing the Voloom Classic Iron to the Rootie shows quite a gap. Here we have the largest and the smallest volumizing hair iron which caters to different lengths of hair. If you already own a Classic Voloom, there’s no need to purchase a Rootie unless you plan on having a shorter haircut.

The top two volumizing hair irons from Voloom is the Classic and the Petite. Both can provide volume to medium to long hair with a slight difference in the plate size being that the Classic has 1 ½ inch in width and the Petite has an inch.

However, the Petite shows some trouble with getting close to the hair roots. The Classic doesn’t have this problem.

The Voloom Hair Volumizing Irons are innovative hairstyling tools, and there’s no doubt about that. You can achieve instant fullness or upgrade your usual hairstyles without fussing too much with various hair products.

Is it worth it?

Depending on your hair type, length, and condition, choose the right Voloom for you, and you will be enjoying a great hair day every day.